Some of us at some point in time would have contemplated suicide. We may remember those moments and when we think about it now, it may seem very silly. And worst thing is some people even go attempt it but fail miserably and lose their face with their neighbours, friends etc.

My friend suggested me a movie called “Hemlock Society”. This is a Bengali movie. As far as I know with my very little knowledge in Bengal cinema they mostly make art films or parallel films. But my friend and brother insisted that this movie is a good one I started watching it.

The film starts with a young upmarket woman, listening to music in a club where she finds out her boy friend of 14 years whom she is going to get married to in a month’s time, passionately kissing some other girl. She breaks up with him. Her father, who is a doctor lives with his second wife. The girls gets her sleeping pill medication from her father. In an age old fashion, she tries to attempt suicide but saved at time by Ananda Kar (Be Happy), a random young man, who runs an institution called Hemlock society. 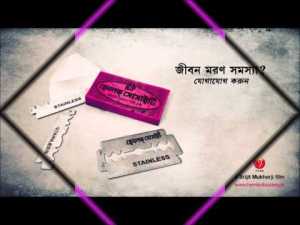 His society helps people who try to commit suicide. The tag line is “End you life if you want to, but dont make a mess of it”. He leaves his card with her offering a crash course to how to mentally, physically get ready for a successful suicide. The next morning the girl learns that she is fired from her job and she is pretty sure, her dad who is married again doesn’t care about her. She decides to join the crash course. What happens next is to be seen on laptop, phone or computer 😀

The movie didnt go over the top at any point of time. Instead of giving the same old reason as “Think of your family, parents, friends” to convince people from suicide the director implies why one should think about his/herself before committing the act. The storyline may be dark, the movie is hardly that. The music, cinematography everything is soothing and sometimes very happy. The colors are very well chosen for each scene, reflecting the mood.

The best part of the movie is the protagonist and his witty dialogues. He is a rich kid who drives a BMW and have good taste. At one point of time he says he would like his life partner to be familiar with ” Feluda, Neruda and Derrida.” Every man’s dream. He flirts shamelessly with the girl humming nice hindi tunes all along.  When the girl mentions that he is using metaphor instead of simile he shrugs and says

“Tell me something I don’t know”

“You may be the best but I am better”

“Well, I don’t have any qualms being second best. Its just for few days right?”

The ease the characters talk about their suicide plans and the impending death is nicely done without going over the top. There are no over the top scene by the people who gets themselves enrolled in the course about their decision, chocked voice and misty eye staring, which by itself was so refreshing.

Each actor has given their best. Be it the girl’s father who was indifferent till the girl getting lost but breaks down when visiting morgue to identify a body and his reactions when he sees the dead body is worth whistling. The girl’s step mother role is kind of complicate role and Roopa Ganguly pulls off with great ease. She never stands between her husband and his daughter. Understand when her husband loses his cool in police station and so on.

Some of the scenes in the start of the films which tells us the mindset of the girl and her intoxication were shot with handheld camera, this trend continues through out the movie and at some point of time you realize with the stability of the girl’s mind the camera has started moving smooth too. The scene in which she confronts Ananda Kar room is a very good example of art direction and the camera angle, acting, music, direction and what not.

This is the third movie of director Srijit Mukherji. His previous films were critically as well as commerically successful. I am sure that this movie would have done great too. The lead actor is Parambrata Chatterjee, who did exceptionally well in the movie Kahaani and the lead lady is Koel Mullick.

All the honest question which the characters were afraid to ask themselves in the movie is asked and brutal honest answers are given. Where the film stands apart is its free of the clichés. Anybody who downloads it with subtitles can understand the movie well, but if you know about Hindi movies of 70s, you will enjoy it much more.

Hemlock Society – is worth watching.